gamedev.net recently linked to this video about the making of Marble Madness, which got me thinking about the raster-to-vector via contour extraction script I wrote in Python last year and the fact that, it being the future and all, I can probably find all of the art from Marble Madness unrolled into a single image file. So three clicks later and, oh yeah:

So I ran the above through my raster-to-vector converter. Here are the results (zipped, this is a huge file, over 20,000 SVG paths)  This file kills Adobe Illustrator. It took 15 minutes just to open it.

SVG for a single level is more manageable.  Here’s  the 2nd level as unzipped SVG … (curious to see if various browsers can handle this) Illustrator could handle this one pretty well so I experimented with applying various vector filters. Below is a bit of it with the corners rounded on the paths (click for a larger version):

Not sure what this all amounts to … just some stuff I did today. However I did learn 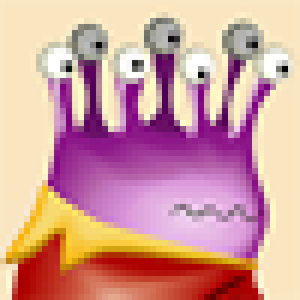